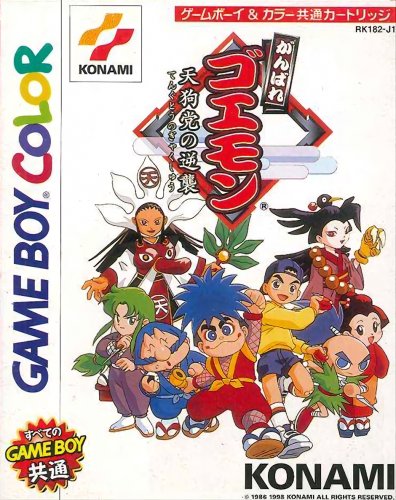 By Perichor : September 15
A unique entry in the Ganbare Goemon series, Tengu-to no Gyuakushu! doesn't place you in the shoes of the wily Goemon and his gang of crime-fighting buddies but instead casts you as a small kid from modern Japan that gets magically whisked away to Goemon's feudal Japan. You'll get to meet Goemon and co. in the flesh and as luck would have it, a unique threat looms over both eras and only you can save the day.

The game plays as a traditional Japanese RPG in which you control a party of up to 3 characters from Goemon's gang and explore the game world getting quests and advancing the main plot. Combat switches you to a turn-based side-view in which your selected "lead" character performs the main attacks and actions while your other characters lend their special abilities in supporting roles.