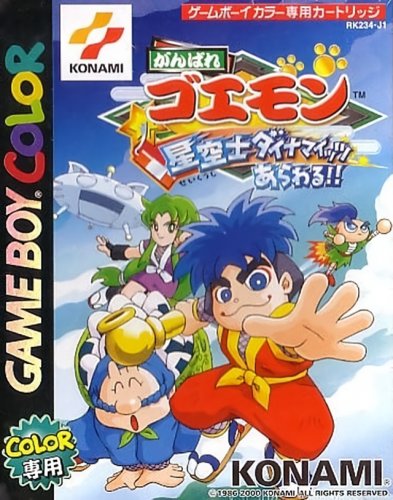 By Perichor : September 16
Hoshizorashi Dynamites Arawaru!! marks another platformer entry in the Ganbare Goemon series. Forgoing RPG touches, the game returns to the action / platformer roots of the 16-bit titles by casting you as Goemon and his pal Ebisumaru as they traverse several levels based on a bizarre version of feudal Japan in hopes of defeating the forces of an evil alien invader.

The Game alternates between stages featuring either Goemon or Ebisumaru. Each character takes a different route towards the bad guy and as a result the stages scroll differently for each character. You can collect upgraded items and weapons but there's no character upgrading besides that. The game also features mid-level bonus rounds featuring the rest of Goemon's buddies in several arcade mini-games as traditional for the series.

Due to possible display errors, please use another GBC emulator instead of VBALink.