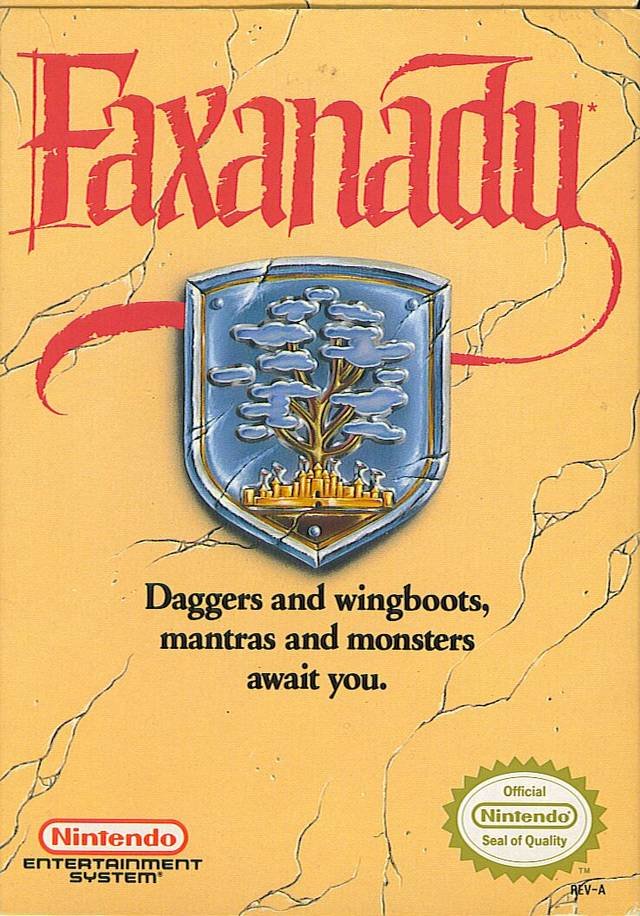 By Tanuki78 : June 5
Faxanadu is a 2D platformer with elements of role-playing in addition to side-scrolling action.

The story is a classic one of good versus evil. Disaster strikes the once peaceful Elven town of Eolis. The sky rains meteorites upon the World Tree. Wild animals and evil monsters terrorize the citizens. The water supply from the wells is dwindling, plants are withering, and people are dying. A lone warrior returns to Eolis and is asked by the king to find out the source of the disasters, and put an end to an unexpected outbreak of hostility from the Dwarves.

There are many places the hero must visit during his quest including medieval-style towns and country villages, fortresses, caves, and gloomy bogs - each with its own ambiance and musical score. The protagonist will be talking with the villagers, collecting gold to buy weapons, armor and other objects, jumping over obstacles and using items. The hero can attack zombies, dwarves, giant snakes, wyverns, evil gnomes, or one-eyed one-footed monsters with various swords and daggers or zap them with a magic spell.

As areas are completed by defeating enemies, the player character gathers experience and achieves a new rank, which is tied directly to the restore password (called a "mantra" in the game). The higher this rank is, the more gold the player character starts with when respawning after being killed or restoring a saved game. Saving a game can only be done in a shrine or temple with a guru. This is also where the protagonist is transported when the game is restored or when he dies.