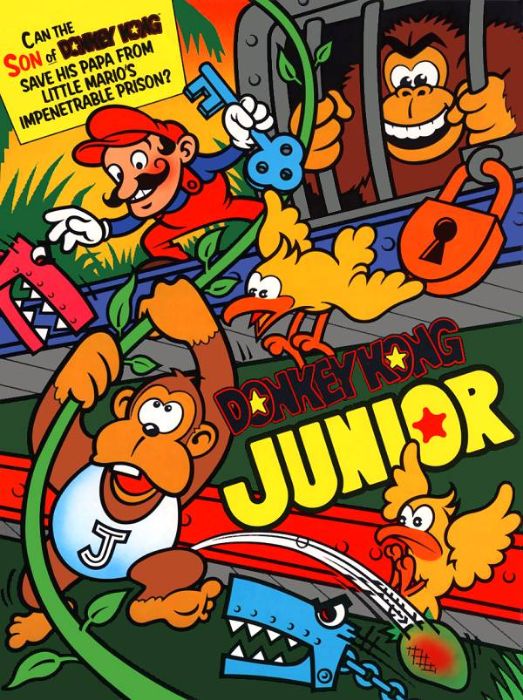 Something of a role reversal for this superb sequel to the seminal 1981 platform-based original, with Mario now cast as the villain (the only Mario game in which this occurred) and Donkey Kong the captured victim.


Donkey Kong's son, DK Junior, must rescue his captured father from Mario's clutches by climbing and jumping his way over vines, chains and platforms before he can reach his father. Junior has to race against time while avoiding the horrible Snapjaws, Nitpickers, and Sparks released by Mario.


Like the original, Donkey Kong Junior features 4 different stages, but in the US version, one or both of the middle stages are omitted in the first 3 levels. In the Japanese versions, all 4 stages are played in their logical order. See Updates below for complete details.


Donkey Kong Junior - The baby ape in the white unitard with a big J printed on the front, this is the son of Donkey Kong and he must rescue his father from Mario's cage.


Mario - This game is quite possibly the ONLY game in Mario's long history where he is the enemy.


Donkey Kong - Poor DK was captured by Mario after the events portrayed in Donkey Kong. Now he must helplessly watch as his son comes to the rescue.


Snapjaws - These mechanical mouths must be avoided. Blue Snapjaws will drop down a vine and continue to fall off the screen, while Red Snapjaws will climb back up a vine and pose a more permanent threat.


Sparks - These volts of electricity patrol the Mario's Hideout Stage. The red variety follows the loop that they begin on while the blue version follows the vertical strips from one level to the next as they drop to the bottom of the screen.


Fruit - Junior will find various pieces of fruit scattered throughout each stage that he will pluck when he touches them. The fruit will fall and take out any enemy in its path until it reaches the bottom of the screen. They are one of the best sources for bonus points.


Keys - On the Chains Stage, Junior must push 6 of these up a chain into the lock positioned at the top of the stage. When he does, Papa will be set free.