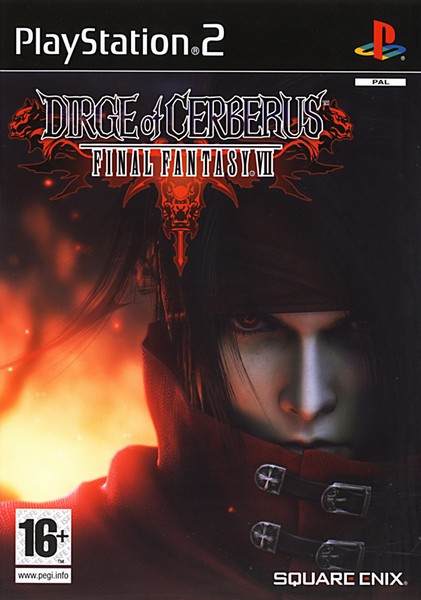 After a new organization arises from the events known as "Meteorfall", Vincent is called to the surviving town of Kalm by Reeve Tuesti, an old ally who controlled Cait Sith. Vincent has been invited to the town's celebration, but during the festivities, a group of soldiers attacks the town, killing and capturing the people. It is up to Vincent to protect the innocent once more, and find out why these soldiers are also after him.

While set in the world of Final Fantasy VII, Dirge of Cerberus is an action shooter that runs through twelve chapters. The on-screen action can be controlled by the analog controller, or via the Playstation 2's mouse and keyboard accessories, making it more in line with PC-style shooters. Being a character driven shooter, the perspective can be changed from first to third person on the fly to navigate through the multi-level environments.

Several items and characters from the series make their return, as well as the Chaos break limits system, which allows Vincent to take the monstrous forms he changed into from Final Fantasy VII to inflict more damage on the enemy. Taking a nod from its RPG-based parent, the game does allow Vincent to find the usual healing items, materia spells and gil from the Final Fantasy universe, in which he can buy and sell for other new items.

The game also features a weapon customization system, which allows the player to mix and match weapon parts to form more powerful attack items and abilities.