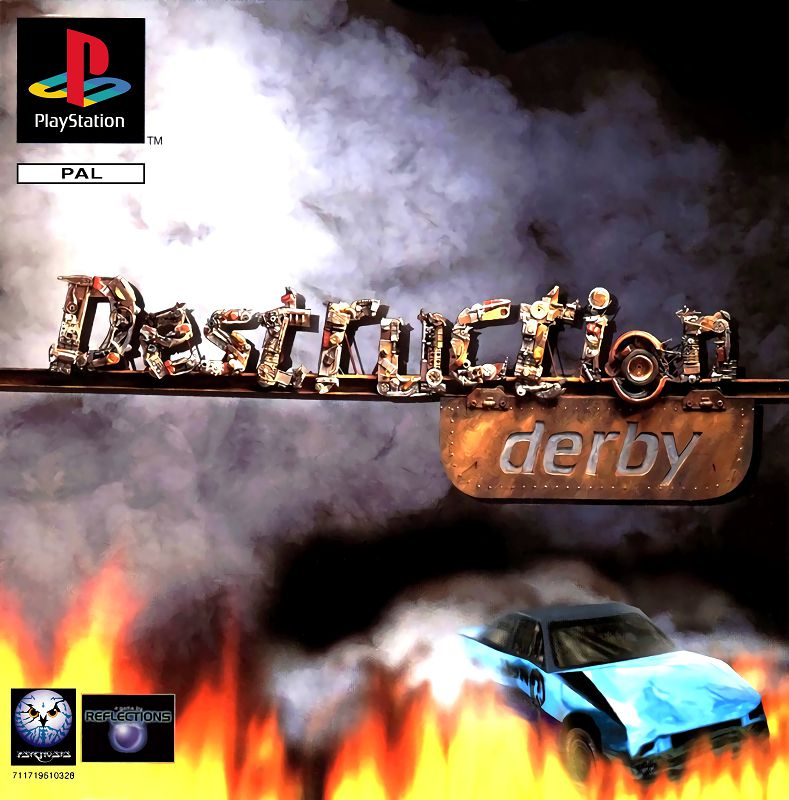 Sunday, Sunday, Sunday! Get down to your local sports arena for some crash 'em up vehicular destruction! Destruction Derby features only one main objective: destroy, smash, dent, bash, and crash your vehicle to put your opponents out of commission! If your car is the last car running at the end of a match-up, you win!

Likewise, the Stock Car Racing mode is a cut and dry racing season throughout the game's various tracks. Though you can still bash your vehicle into your opponents (and your foes will be doing the same to you), no points are awarded for spectacular crashes. That's reserved for the Wreckin' Racing Season mode! Acting as the meat and potatoes gameplay option of Destruction Derby, Wreckin' Racing is a lap-based destruction fest through five different divisions.

Players will race against other opponents throughout a variety of tracks, but unlike the Stock Car Racing mode, points are distributed for technically impressive crashes. For example, if you wreck an opponent's car or spin an opponent 360-degrees, you'll receive ten points! By spinning an opponent's car 180-degrees, you're awarded four points. And because Wreckin' Racing is actually a race of sorts, whoever finishes the track in first place is awarded additional points.

At the end of a Wreckin' Racing season, players will be thrown into the brawl for it all Destruction Derby. At the end of the Destruction Derby, everyone in your division's points are tallied; if you've obtained more points than anyone else, you'll move up to the next division! Be careful though -- you're punished for poor performances. If you finish in the last place of your division, you'll be demoted to the previous division.

In addition to all of this, there are a variety of multi-player options including the Duel, Team Pairs, Tag, and Seek and Destroy modes. In order to utilize these features, however, you'll need a Link Cable and two PlayStations. The Duel is a two-player romp on an empty track with the objective of either finishing the course or dismantling your friend. Team Pairs is an up to 40-player assault in teams of two. Players on the same team will want to work together (you'll share points) to ensure a top finishing position.

Tag pits you and a friend against 18 computer-controlled vehicles. At the beginning of the match, all 18 cars will be going after you or your friend; the idea is to survive as long as possible by tagging off. Finally, the Seek and Destroy option is an unfriendly version of tag. Not only are you not working together with your friend, but as soon as you ram into a computer-controlled car, that car will chase your friend. The battle rages back and forth until either you or your friend's vehicle has been taken out of commission!

Destruction Derby also features a variety of replay camera options, three different difficulty settings, and a pit compound to see how much damage you've done to other cars. So what are you waiting for? Get in there and destroy some cars!