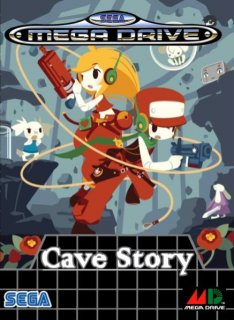 This is a rewrite/port of the popular freeware game Cave Story for Sega Mega Drive/Genesis. It should work on any console or emulator. The main story is "finished", only little things and bugfixes remain.

Developed by Daisuke Amaya, a Japanese known as Pixel, Cave Story is inspired by two-dimensional classics such as Metroid and Castlevania, namely a mixture of platforming, action and adventure. The player controls Quote, a character capable of jumping, using weapons and accessories that he obtains successively during the adventure. The end of a level is usually followed by a confrontation with a boss, Balrog being a recurring opponent. The game space is not a linear succession of levels. Indeed, the universe in which the plot takes place, a flying island, is organized in a coherent and open way. The village Mimiga is the center of this space. It is in this peaceful place that the main characters reside. It gives access, by teleporters and passages, to the various zones of the universe. The main character improves his abilities in three different ways. Life capsules scattered in the universe can increase his life and facilitate his progression. Once in possession of a missile launcher (with limited ammunition), he can also increase the maximum number of ammunition he carries. Finally, the weapon evolution system thanks to the orange triangles is one of the particular points of the game, which differentiates it from other titles inspired by Metroid or Castlevania.