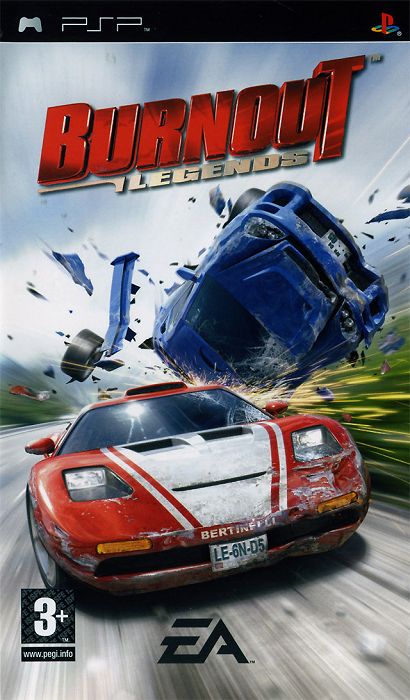 Taking the series' award-winning speed, action and attitude on the road for the first time, Burnout Legends combines the best moments in the franchise's history with exclusive PSP-only features, gameplay and connectivity.

Gamers can also spend endless hours with the Burnout Legends suite of multiplayer options, including WiFi showdowns, customizable mini-championships and a wireless Game Share option where friends can play head-to-head with one UMD.

Irresponsible Speed - Burnout Legends captures the series' blistering speed and intensity, delivering the fastest, most dangerous racing experience available on the PSP. Blinking is overrated
Best of Burnout - Burnout Legends includes completely redesigned versions of the best tracks and crash junctions in Burnout's history - all revved up for aggressive driving and maximum takedowns on the PSP
Wireless Multiplayer - Gamers can take down their friends in four-player WiFi action in Race, Crash, Pursuit and Road Rage modes
Customizable Championships - The Burnout Legends wireless mode lets gamers create multiplayer race series that cycle through multiple events … keeping players behind the wheel, not searching for matches in the lobby
Unlockable Surprises - Each copy of Burnout Legends ships randomly with 5 of 25 unlockable cars. The additional 20 can only be collected by playing friends in WiFi challenges
Game Share - Gamers can upload a level of Burnout Legends to their friend's PSP so they can both play - from just one UMD.
Crash Mode - It's in there! A new scoring system does away with multipliers, challenging gamers to strategically launch their car into traffic in search of the biggest, Hollywood-style crashes imaginable
Pursuit Mode - The cops are back! Get behind the wheel of all-new police cars for the ultimate game of high-speed cat-and-mouse
Gameplay Modes - Burnout Legends delivers enormous variety with a total of nine gameplay modes, including Crash, Pursuit, Burning Lap, Road Rage, Eliminator, Race, Time Attack, Legends Face-Off and Legends GP
Championship Structure - An all-new progression system offers frequent rewards, keeping gamers coming back for quick bursts of on-the-go action