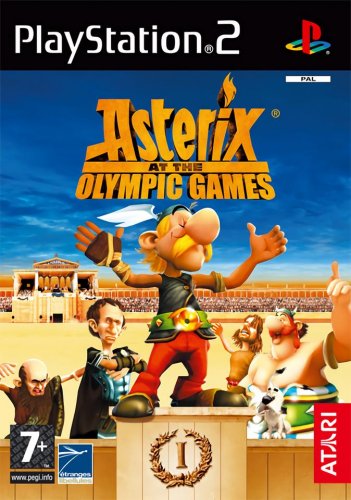 Lovestorix is in love with Princess Irina but Brutus also wants to marry her. To solve this problem, the Princess decides that she'll marry whoever wins the Olympic Games. At the same time the evil Doctormabus has discovered a dimensional key with which he can open portals to parallel dimensions and with it threatens to destroy the balance between the worlds. But of course Asterix & Obelix come to the rescue and have to not only stop Doctormabus but also help Lovestorix win the games.

Like in Astérix & Obélix XXL 2: Mission: Las Vegum you take control over both Asterix and Obelix and fight your way through hordes of Romans, building up combos with your punches and solving small riddles on the way. You can also change between controling Asterix or Obelix at any time. But since you are taking part in the Olympic Games, there are also several mini-games waiting which need to be beat in order to progress further in the story. These mini-games include things like Long Jump or Tug of War. These field events are played much like in Asterix and Obelix which means for example that you alternate between two buttons as fast as you can to run.

Once you've completed an event in the story mode, you can also play these events seperately in Olympic Mode in which two players (or one player against the CPU) fight for the gold medal in each discipline.

During the story mode you also collect helmets by destroying scenery objects or beating up Romans. These can be used to buy health or new combos ingame or unlock small parts of the movie. You also unlock new characters for the Olympic Mode as you advance in the story.

Also the game neither directly follows the storyline of the comic nor the movie, the twist with the portals to the real world is used to also include some actors of the movie in the game.