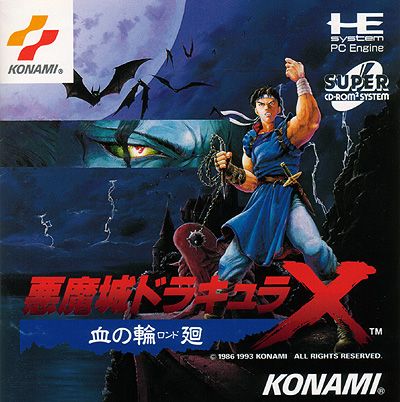 Count Dracula, the evil Transylvanian vampire lord, is resurrected in the year 1792, a century after the brave vampire hunter Simon Belmont vanquished him. His demonic servant Shaft is sent to nearby village to kill men, abduct women, and set the village on fire. Richter Belmont, Simon's descendant, swears to free the women, among which is his fiancee Annette. He takes the Vampire Killer, a powerful whip he inherited from his ancestor, and enters the castle, hoping to put an end to the Dark Lord's reign.

Castlevania: Rondo of Blood is, like its predecessors in the series, an action platformer. Richter is trying to reach the end of each stage, defeating evil creatures on the way with his whip and traditional sub-weapons (throwing axes, daggers, holy crosses, etc.). He can also perform powerful "item crash" attacks with his sub-weapons. In comparison with the previous entry in the series, Super Castlevania IV, the game lacks the eight-directional whipping. As with most Castlevania games the levels consist of platforming challenges which require good timing and reactions. At the end of each stage Richter will face a powerful boss.

The kidnapped women are hidden in the castle and to find them Richter needs to uncover hidden exits which may lead to alternative levels and bosses. One of such hidden areas unlocks a second player character: Maria Renard, Annette's sister. She is weaker than Richter but has a greater agility and her own abilities such as sliding and double jumping, which allow her to find even more alternative paths. She also has her own special attacks with unique sub-weapons.