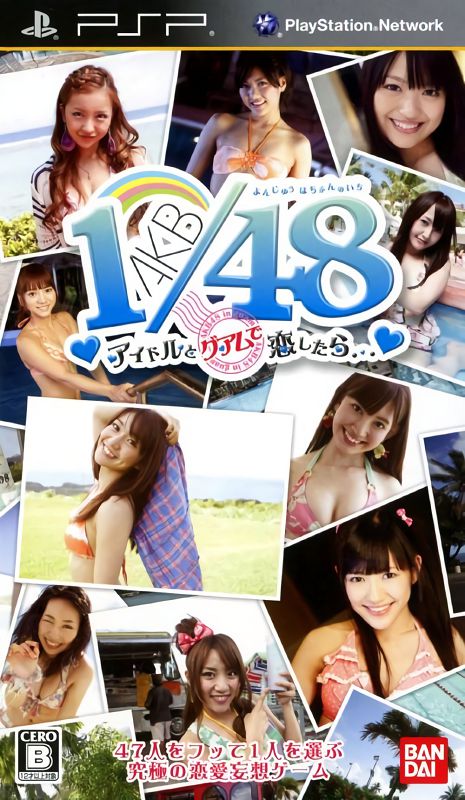 Unlike the original game, AKB1/48: Idol to Koishitara..., released a year earlier, this game is sort of a dream where each of the AKB48 idols are in love with you, but you're only be able to select and profess your love to one of them in the end. AKB48 (AKB is abbreviation of Akihabara, an electronic town in Tokyo) is a j-pop idol group with, yes, you guessed it, 48 members in total. Members aren't constant and their popularity is based on votes by the fans of the group. As the title implies, the game takes place in the island of Guam, and idols will wear bikinis a lot, and regular clothes lot less.

The game mostly plays like a visual novel which user real-life locations and actual idols in various poses over the background image instead of anime art. The setting itself is not the only thing differing from the first game. This game features new poses and photo shots with different clothes (the more showing kind) and re-recorded voice-acting by AKB48 members for the new scenario. The game progresses one day at the time where you spend with one of the idols, either on a date or in casual talk. The player is given a list of letters sent to you by AKB48 girls with their profiles. Based on who sent you the message, you can reply to it which eventually leads you to a date with that person. You can use the phone to call the person of interest and set a date. During the date part which plays as a visual novel, there will be a dialogue selection which will show the girl you're with if you're rude, indifferent or like her. This in turn may prompt her to contact you again at the beginning of the next day. Some correspondence occurs irregularly when the girl liked how she felt when she was with you on previous dates. Likewise, addresses of the girls you were rude with will disappear from the list until only one remains. Initially, all 48 girls are listed as your potential girlfriends. During special so called escort event scenes, idols will wear a special bikini and pose jut for you. Any event scene during visual novel gameplay lets on-screen text be toggled off and allows for certain amount of zooming.

Various unlockables such as visual cards, event scenes, and steel photos can accessed from the menu, while collected cards can be traded with other players. AKB48 soundtrack does not need to be unlocked and can be listened via BGM player. It additionally lets the player select default BGM song and theme song for each of the ABK48 members.

Initial first print retail release comes with a photo (random one out of 48) of one of the AKB48 members.