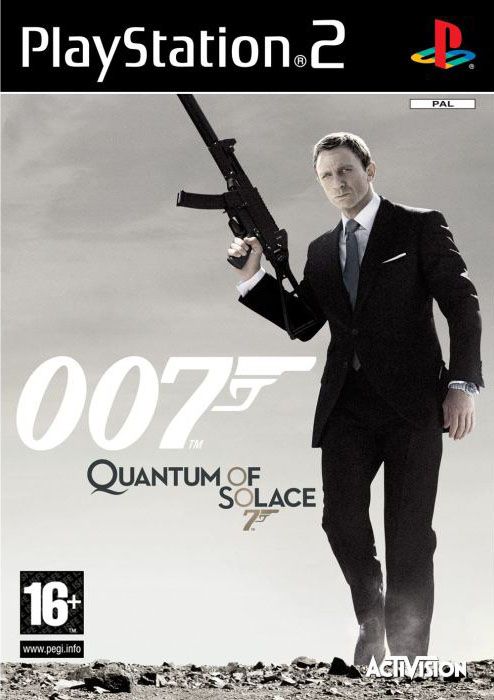 Based on the scripts of the 21st movie "Casino Royale" and the 22nd James Bond movie of the same name as the game, it follows closely the story of those movies but elaborates many scenes and fills in some blanks.

In a first person shooter fashion, the player directs Bond through the levels filled with many bad guys. To overcome those, Bond has several different kinds of weapons at his disposal ranging from his trusted P99, over machine guns to full blown grenade launchers. But the levels are also filled with canisters that either explode upon shooting or vent gas that temporarily blinds the enemy. Bond can also perform a take down move which puts an enemy out silently. If Bond is near enough to an enemy, a button press will initiate the corresponding mini-game in which the player needs to hit a circle with a crosshair in a short period of time. Is the player successful, the enemy is out of the play but when he fails to hit the mark in time, Bond will be thrown away from the enemy and is vulnerable for a short period of time. In addition Bond can duck into cover to avoid bullets and shoot blindly over it or look out of it to get the kill. Bond also automatically regenerates his health when not under fire.

Other obstacles in the levels are cameras, which can either be shot or disabled and electronic locks which need to be hacked in another mini-game. There arrows flash green or red on the screen and the player needs to press the corresponding button fast enough when it blink green to input the right number into the keypad.

The game also features a multiplayer mode for up to 12 players with the following game modes:

- Bond Versus: one player takes over the control of James Bond and either needs to defuse two of the three bombs in the level or kill all six of the opposing team. In this mode Bond can also see all enemies and has two lives.

- Golden Gun: the first player to score 100 points wins the round. Points are earned by kills but if the player is holding the always visible power weapon called "Golden Gun", he scores 6 points per kill.

- Bond Evasion: in this mode one member of the MI6-team randomly gets to be Bond and needs to get to the escape point of the map to win the round for his team. Meanwhile The Organization tries to stop him by either killing him or preventing him to reach the escape points in time.

Ultragon and lamine091993 reacted to this